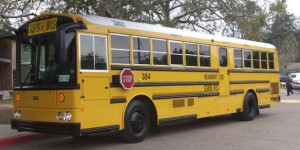 Beaumont Independent School District made the decision to use belted seating on school transportation in June of 2006, following a motorcoach crash that killed two girls and seriously injured many other soccer team members traveling to a game that March.

In the aftermath of the accident, parents formed West Brook Bus Crash Families (WBBCF) to advocate safer bus travel for school children, including the addition of lap-shoulder belts in all forms of school transportation. Beaumont ISD the first school district in Texas to require lap-shoulder belts on all new school buses purchased. Of its 237 buses on the road, 42 are equipped with SafeGuard school bus seats.

On June 8, 2007, Texas Governor Rick Perry signed “Ashley and Alicia’s Bill” into law at a ceremony in the library at West Brook High School, mandating lap-shoulder belts on school buses and charters, beginning in September 2010.

The former transportation director cited that the transition to belted seating has been uneventful – something that quickly became a “natural thing” in school transportation. Students are expected to wear their seat belts, and compliance rates are very high.  They took a serious stance on usage and compliance and enforced their expectations. If students didn’t use the seat belts, they wouldn’t ride the bus. It made the transition and enforcement of the safety rules easy.

In addition to the added safety benefits, discipline issues have been reduced on the buses equipped with belted seats.  The department cited that the seat belts made a difference with behavior because students weren’t moving around as much. Limited movement is also why they did not see much damage to the new seats as they used to with regular seats. 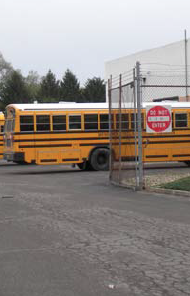