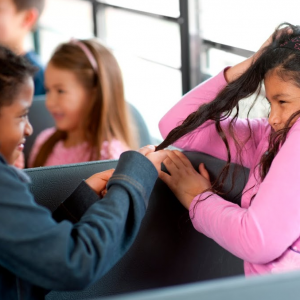 We all know that seat belts save lives and reduce injuries, but when you add them to a school bus, they can make a world of difference in behavior. If your child is being bullied on their bus, or if you’re a driver or transportation director dealing with the issue, lap-shoulder belts, along with assigned seating and an enforced usage policy, could help stop it.

Let’s face it. Kids get rowdy on the bus. They walk the aisles. Sit in their seats in ways they shouldn’t. Lean over seats to talk to the friends behind them. In the worst case scenario, they bully other kids, and on a school bus, that can quickly escalate out of control when other children get on the bandwagon. Lap-shoulder belts keep kids in their seats, and keep bullies away from their would-be victims.

As evidence of their effectiveness, in Bartholomew County Indiana, the school district reported that bullying had been almost eliminated on their buses when they added SafeGuard® lap-shoulder belts. They enforce the use of seat belts. If a child doesn’t wear his, he doesn’t ride for two days. They also employ assigned seats, so if a bullying case arises, they can quickly ascertain who is responsible and take steps to keep that bully away from his or her target.

Bartholomew County isn’t alone. For example, In Helena, Montana, they’ve reported a dramatic drop in discipline write-ups since installing SafeGuard lap-shoulder belts. For school districts like these, Better Behavior Is Just a Click Away®.

Lap-shoulder belts make for a calmer and quieter ride, and drivers – even ones who were initially dead set against them – now report that they are less stressed and can pay more attention to the road. With the children seated properly, they are also in the best position to survive an accident should one occur. 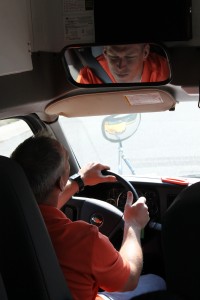 Safer students. Better behaved buses. If you’re ready to make these things a reality in your child’s school district, please download our advocate kit and share it with other parents. It takes your voice to make change happen.  And, you have a lot louder voice than you might think.